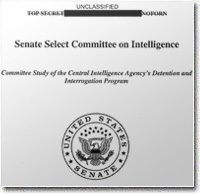 Outside Contractors Ran Torture Program, Earned $1800 per Day, $81 Million Overall, Had No Prior Experience in Interrogation, No Arabic, but Sold CIA on "Hard" Measures

Please excuse us for the commercial before the video

Washington, D.C., December 9, 2014 – The Senate Select Committee on Intelligence today released the executive summary of its long-awaited "Study of the CIA's Detention and Interrogation Program," describing in more than 500 pages a dysfunctional agency so unprepared to handle suspected terrorist detainees after 9/11, that the CIA bought into private contractors' proposals for torture, and then lied to Congress, President Bush, the Justice Department, the public, and to itself about the purported effectiveness of the program.

The Senate release includes a 6-page foreword by committee chair Dianne Feinstein (D-CA), a 19-page list of 20 specific Findings and Conclusions, and a 499-page Executive Summary which details the development of the torture program after 9/11. The longest single section of the Summary, from page 172 to page 400, eviscerates the CIA's "eight primary CIA effectiveness representations" along with 12 "secondary" ones by showing either there was "no relationship" between the cited success and detainee information "during or after" the CIA's use of torture, or that such information was otherwise available and even obtained prior to the use of torture.

Including 2,725 footnotes to specific CIA documents, the Senate report shows a pattern of repeated factual inaccuracies by CIA in communications with the Justice Department (to get legal cover for the program), with the White House (including false information inserted in the President's Daily Brief and one of President Bush's major speeches), with the Congress (Appendix 3 starting on page 462 provides more than 30 pages of false statements in testimony by former CIA director Michael Hayden), and even inside the Agency itself.

The report cites CIA documents showing CIA officers at the secret detention sites repeatedly protested the torture program — one interrogator called the program a "train wreak" [sic] and wrote "I intend to get the hell off the train before it happens." But higher-ups, including CIA directors George Tenet, Porter Goss, and Hayden, overruled objections and kept the program going until President Obama ended it in 2009. The head of CIA counterterrorism operations, Jose Rodriguez, even reprimanded CIA officers at one site for their protests, warning them to refrain from using "speculative language as to the legality of given activities" in CIA cables.